In my last post, I walked through an intuition-building visualization I created to describe mixed-effects models for a nonspecialist audience. For that presentation, I also created an analogous visualization to introduce Bayes’ Theorem, so here I will walk through that figure.

As in the earlier post, let’s start by looking at the visualization and then we will recreate it using a simpler model and smaller dataset.

First, let’s review the theorem. Mathematically, it says how to convert one conditional probability into another one.

The formula becomes more interesting in the context of statistical modeling. We have some model that describes a data-generating process and we have some observed data, but we want to estimate some unknown model parameters. In that case, the formula reads like:

When I was first learning Bayes, this form was my anchor for remembering the formula. The goal is to learn about unknown quantity from data, so the left side needs to be “unknown given data”.

Prior and posterior describe when information is obtained: what we know pre-data is our prior information, and what we learn post-data is the updated information (“posterior”).

The likelihood in the equation says how likely the data is given the model parameters. I think of it as fit: How well do the parameters fit the data? Classical regression’s line of best fit is the maximum likelihood line. The likelihood also encompasses the data-generating process behind the model. For example, if we assume that the observed data is normally distributed, then we evaluate the likelihood by using the normal probability density function. You don’t need to know what that last sentence means. What’s important is that the likelihood contains our built-in assumptions about how the data is distributed.

The average likelihood—sometimes called evidence—is weird. I don’t have a script for how to describe it in an intuitive way. It’s there to make sure the math works out so that the posterior probabilities sum to 1. Some presentations of Bayes’ theorem gloss over it, noting that the posterior is proportional to the likelihood and prior information.

There it is. Update your prior information in proportion to how well it fits the observed data. My plot about Bayes’ theorem is really just this form of the equation expressed visually.

The data I presented at the conference involved the same kinds of logistic growth curves I wrote about last year. I will use the same example dataset as in that post.

Here x is a child’s age in months and y is how intelligible the child’s speech is to strangers as a proportion. We use a nonlinear beta regression model. The beta regression handles the fact that the data are proportions, and the nonlinear piece encodes some assumptions about growth: it starts at 0, reaches some asymptote, etc. Finally, our prior information comes from our knowledge about when and how children learn to talk. (Nobody is talking in understandable sentences at 16 months of age.)

Here is the model specification. I won’t go over it in detail.

Sampling from the prior

If we don’t have any data in hand, then running the model forwards will simulate data using only the prior. I am not going as far as simulating actual observations; rather I will sample regression lines from the prior. These samples represent growth trajectories that are plausible before seeing any data.

We can use sample_prior = "only" to have brms ignore the data and sample from the prior distribution.

We can randomly draw some lines from the prior distribution by using add_epred_draws() from the tidybayes package. An “epred” is a predicted expectation (a model-drawn average on the same scale as the data). 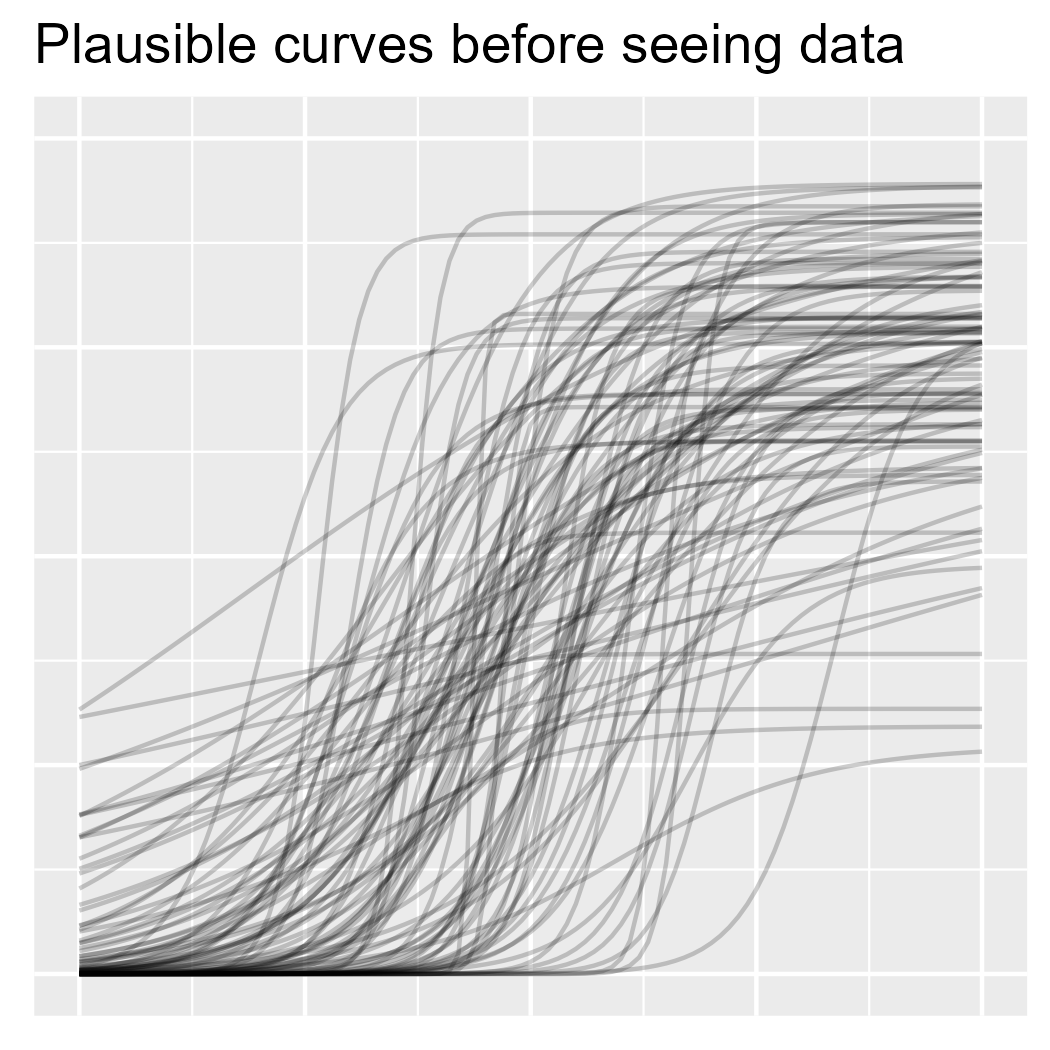 A word of encouragement! The prior is an intimidating part of Bayesian statistics. It seems highly subjective, as though we are pulling numbers from thin air, and it can be overwhelming for complex models. But if we are familiar with the kind of data we are modeling, we have prior information. We can have the model simulate new observations using the prior distribution and then plot the hypothetical data. Does anything look wrong or implausible about the simulated data? If so, then we have some prior information that we can include in our model. Note that we do not evaluate the plausibility of the simulated data based on the data we have in hand (the data we want to model); that’s not prior information.

To illustrate the likelihood, I am going to visualize a curve with a very high likelihood. I won’t use Bayes here; instead, I will use nonlinear least squares nls() to illustrate what a purely data-driven fit would be. This approach is not the same as finding the best-fitting line from the posterior distribution1—waves hands—but hey, we’re just building intuitions here. 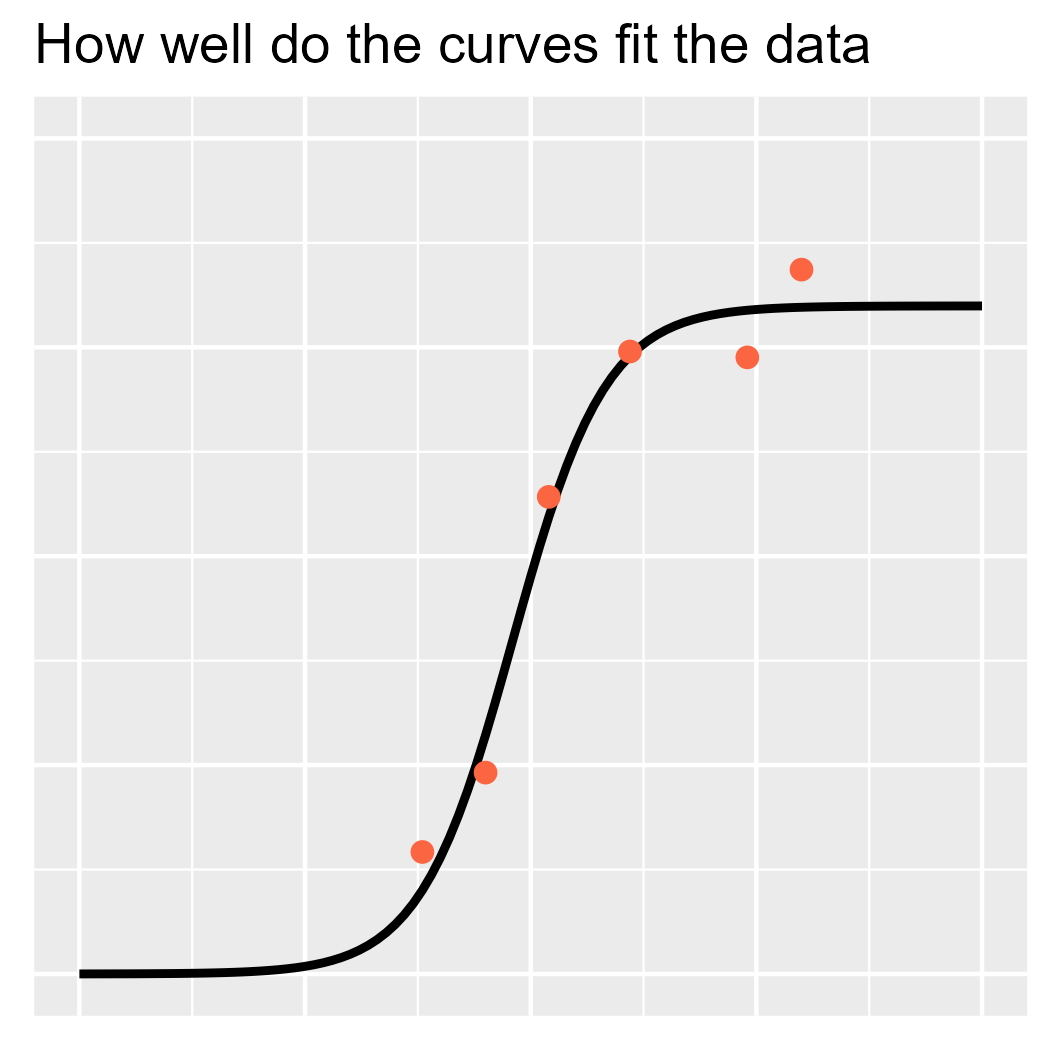 Sample from the posterior

And now let’s plot the curves with the data, as we have data in hand now. 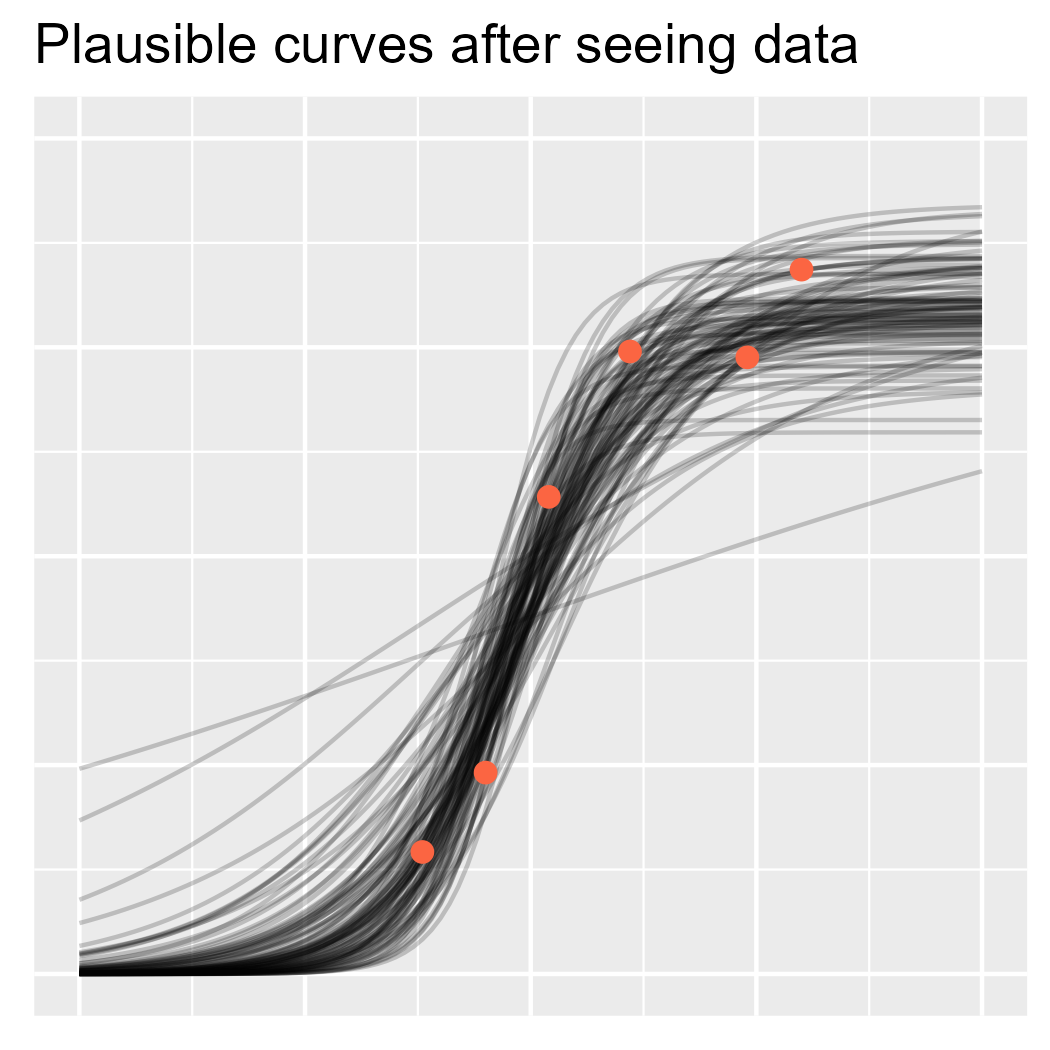 Finally, we can assemble everything into one nice plot.

3Blue1Brown is a YouTube channel that specializes in visualizing mathematical concepts. It’s amazing. About a month after my presentation, the channel covered Bayes’ theorem. The approach was more basic: It looked at probability as discrete frequency counts and using Bayes to synthesize different frequency probabilities together. Think of the familiar illness-screening puzzle: x% of positive tests are accurate, y% of the population has the illness, what is the chance of having the illness given a positive test? And yet, the video recapped Bayes’ theorem with a three-panel visualization:

The heart of Bayes’ theorem indeed.